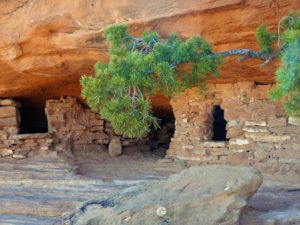 [Relic] shifted the weight of his pack and looked up. Four-by-four posts, reinforced with crisscrossed two-by-fours, rose upward toward the top of the cliff. Slatted stairs were nailed to the under-frame and railings guarded their way to the top. The steps switched back twice before the stiff frame ended above the sheer rock face.
Those stairs belong at some public park, he mused, some Sunday afternoon boardwalk, with hotdog stands, ice cream, kids clutching helium balloons on strings. Deep in the maze of neck-craning cliffs and naked hoodoos, out among the coyotes, cougars, and rattlers, well, Relic thought, they were like tits on a catfish. Way the hell out of place… 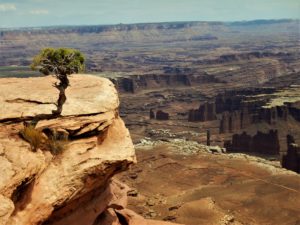 Excerpt from Wings Over Ghost Creek:

Pools of water, collected from the recent rain, filled potholes in the sandstone terrace. He stared at the largest one, six feet to his left, and his eyes refocused away from the rough land, toward the smooth bath, into what the puddle reflected. Suddenly he was seeing the heart of the Milky Way again, billions of stars not soaring through space above him but immersed in the tiny pool, halos cast at unfathomable distances all right here, caught in an intimate sheen of water at his very feet.

He moved closer to the shallow pocket of water and squatted at its edge. He stared downward, seeing upward, into the lights of the night sky, proof that the rest of the universe was not empty, proof that it was speaking to him after all and it all floated in a living mirror within reach of his fingertips. He reached out to touch the surface then pulled back quickly, afraid he might disturb the glimmer, the medicine of it, soothing his wounds, sweeping all the puzzles into a new perspective, loosening his own.